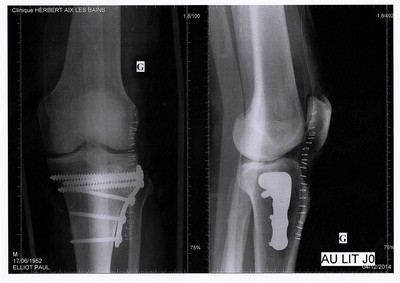 Tibial Plateau Fracture - an account of treatment and recovery from one of our clients and Fiona Watson, Physiotherapist

Paul has very kindly given us a summary of his accident and injury which resulted in seeing Fiona one of our physiotherapists for treatment. We have Paul's account of events followed by a summary of what a tibial plateau fracture is and the treatment carried out by Fiona Watson.

"I had an accident on the slopes in Val Thorens, Savoie , France on 2nd Dec 2014 which resulted in a tibial plateau fracture and an operation on 4th Dec at Clinique Herbert, Annecy, France. I flew back home on the 7th Dec and reported to Hexham General on the 8th with an examination at the trauma clinic the following day.

On 20th January I started physio with Fiona and managed to get back to Val Thorens for some social ski-ing on the sunny blue slopes on the 7th March with more ski-ing again, blues and reds- a bit faster on the 20th April!! I've continued rehab in the gym using cross trainer, static bike, stepper etc. no running (yet) road cycling, dog walking, swimming – no problem.

I am really happy with the support and confidence given by Fiona. I've had no setbacks in my rehab and I feel I owe a great vote of thanks to Fiona for smoothing out the bumpy road to recovery".

A tibial plateau fracture is a fracture that disrupts the continuity of the bone occurring in the proximal part of the tibia (or shinbone) called the tibial plateau; affecting the knee joint, stability and motion. The tibial plateau is a critical weight-bearing area, and can may be divided into low velocity or high velocity fractures.

Low velocity fractures are more common in older females due to osteoporotic bone changes and are typically depressed fractures. High velocity fractures are commonly the result of, falls or sports related injuries. Fractures to the tibial plateau generally need to be surgically managed with an ORIF (open reduction internal fixation – pinned and plated) unless undisplaced. Trauma to the meniscus (cartilage) and ligaments that keep the knee stable, can also be subject to damage due to the mechanism of injury.

Tibial plateau fractures are classified following an x-ray by using the ‘Schatzer classification’. This classification system is commonly used in Orthopaedic trauma to assess the degree of injury, treatment plan and predict prognosis. It is composed of six condyle fracture types classified by fracture pattern and fragment anatomy. Each increasing numeric fracture type denotes increasing severity. The severity correlates with the amount of energy impacted to the bone at the time of injury and prognosis.

Paul was diagnosed with a Schatzer type II fracture when he came to see me for physiotherapy, following his consultant review with Orthopaedics. He was placed in a Controlled motion brace set to 0-60 degrees, while partial weight bearing on two elbow crutches. He had some concerns about fracture healing times, prognosis, and generally getting back to his sports.

Tibial fracture plateau fracture rehab is lengthy (up to 6 months +) due to the restrictions placed by the consultant following surgery. In the initial stages of his physiotherapy, we worked on active assisted movements in a non-weight bearing position. His scar healed very well, although it is normal to have a considerable amount of swelling post op. His brace was then adjusted to 0-90 degrees to allow greater range of movement, while increasing a graded load through the joint to 50% of his body weight.

·         0-6 weeks - We started some work on his quads and hamstrings with some basic isometric work, with the aim of maintaining muscle bulk for an easier transition into higher level rehab. Joint effusion was controlled with ice and soft tissue work.

Paul has made a remarkable recovery considering the severity of his fracture and restrictions on his rehab. He is now fully fit and ready for skiing this winter which is a testament to his commitment and patience, it’s been a pleasure to work with Paul, I'm sure his next ski trip is already booked!