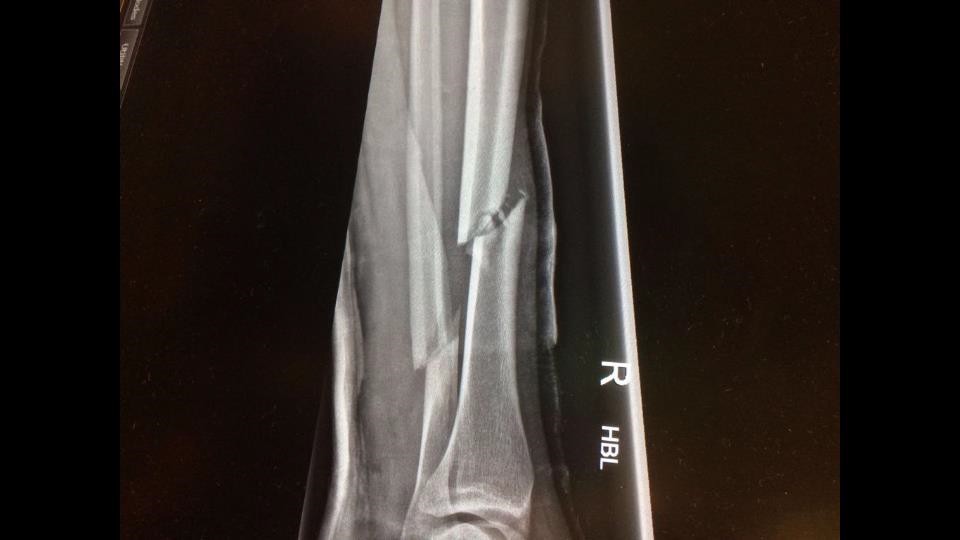 In part 1 we looked at the 5 complex stages of fracture healing from the initial break to full repair, as the bone forms a bulbous collar around the break during the remodelling phase. In part 2 we will look at young footballer who came to myself for rehab at Physiohaus following a significant lower limb fracture. He has kindly agreed to share his x-ray results and his progress through rehab, to encourage others that a return to sport is achievable with the right physiotherapy, encouragement and guidance.

From a physiotherapy perspective following a fracture, as with any athlete, it is vital in the early stages to set realistic rehab goals. Understanding the nature of the chosen sport will ultimately dictate the length of rehab, together with the skill acquisition needed before a complete return to a competitive level. For the purpose of this rehab blog I have added a selection of exercises from the many that were used in physiotherapy.

A 21-year-old male footballer sustained a fractured tibia and fibula playing football, as a result of a collision and direct trauma. The x-ray below taken at A&E show clearly a displaced oblique fracture to the right tibia and fibula. As mentioned in part 1, complications can arise with any fracture particularly a serious displaced fracture. Infection, injury to nerves and blood vessels, blood clots (these may also occur without surgery), malalignment or the inability to correctly position the broken fragments, delayed union or non-union (when the fracture heals slower than usual or not at all).

As a result of the radiograph results, an Orthopaedic trauma team made the clinical decision to perform surgery to reduce and stabilise the fracture with an Intramedullary nail. The x-ray below was taken in theatre following the surgical procedure, which provides the patient with the best possible outcome. 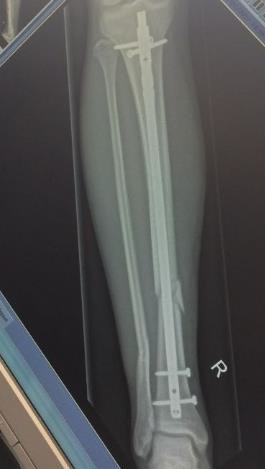 Intramedullary nail fixation remains the treatment of choice for unstable and displaced tibial shaft fractures in the adult. The goals of surgical treatment are to achieve osseous union and to restore length, alignment, and rotation of the fractured tibia. Intramedullary nailing carries the advantage of minimal surgical dissection with appropriate preservation of blood supply to the fracture. Moreover, the surgical implant offers appropriate biomechanical fracture stabilisation and acts as a load sharing device allowing for early postoperative mobilization. (Zelle and Boni. 2015 Biomed central.)

Initially Post op the emphasis is on partial weight bearing with elbow crutches in an air cast boot. This is usually 6 weeks until the consultant is happy with the check x- rays, and the fracture has healed. In this time physiotherapy can start to maintain joint range and muscle power.

It is worth noting that early exercises are basic, non-weight bearing and do not require a gym.

Hydrotherapy is a good option 3-4 weeks into rehab, providing the wounds from surgery are fully healed to prevent infection. When the body is submerged in water, the body is supported allowing the athlete to resist against the water without placing full load through the lower limb. 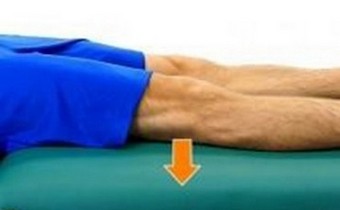 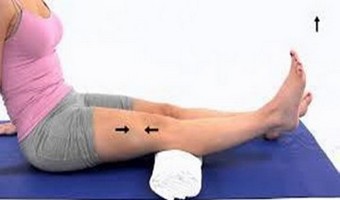 To maintain Quad control and power static quad exercises were carried out by pushing the knee down to the floor (3 sec hold), basic knee extensions over a rolled towel again with a 3 sec hold, are a great way to start the rehab process when loading is not possible. 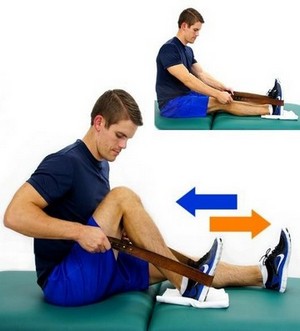 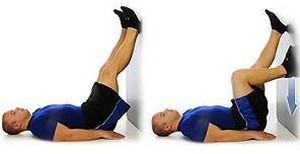 Knee range is usually restricted due to a large amount of swelling post op. Heel slides using a belt or rolled towel can be performed in long sitting aiming to get 90° by 4 weeks. Wall slides are a great way to increase range while starting to incorporate quad and hamstring activity.

Ice therapy is very important in the early stages to control swelling which can be performed at home 2-3 times per day as part of a rehab programme. Pain medication will be prescribed in the early stages which will make rehab and sleeping at night more tolerable.

Healing went well with no post op complications. At 6 weeks we could start loading through the leg in a weight bearing position. 1 elbow crutch was used for outdoors only purely for confidence and balance, however this was discarded at 7 weeks. 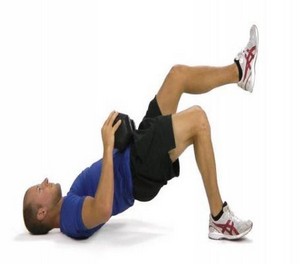 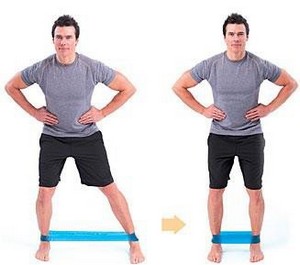 Hip strength training was added into the programme starting with basic bridge work, then progressing to single leg work with a 4kg dumbbell. TheraBand sidewalks are an effective way to work the glutes while practicing control and foot placement. After weeks of walking in an air cast boot on elbow crutches, proprioception and having an awareness of foot placement can become altered. 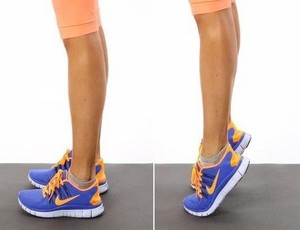 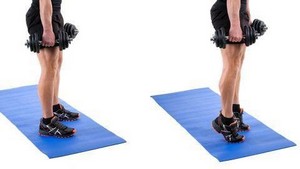 Eccentric loading was initially prescribed on a step (up with the good leg, swop to the operated leg and lower down). Calf raises proved difficult initially due to some muscle atrophy and poor balance, however with some wall support, and correction of technique the emphasis was to load up through the toes predominately the big 1st toe. 4kg dumbbells were then added to increase load and improve strength.

Rehab for the triceps surae

The triceps surae comprises of a pair of muscles located at the calf, the gastrocnemius (which has two heads) and the soleus. These muscles both insert into the calcaneus (your heel bone) and form the major part of the muscle of the posterior leg, which in turn forms a part of the posterior kinetic chain. When the triceps surae contract, it will cause your foot to plantar flex (toes point down). This also contributes to the stability of the ankle complex in the transverse plane. When we look at function during locomotion (walking, running, sport), the triceps surae help restrain the body from falling and provide power for jumping activities. By standing on a rolled towel or half foam roll, calf raises with a flexed knee will strengthen the gastroc and soleus. 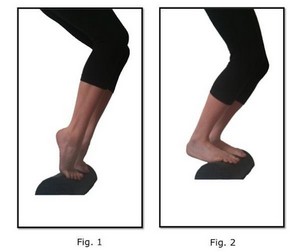 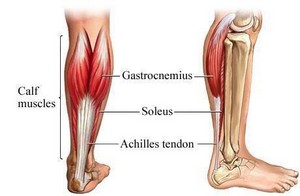 Therapeutic soft tissue work was also performed periodically, to alleviate Achilles pain which is common with this type of injury.

Neuromuscular control is defined as the unconscious trained response of a muscle to a signal regarding dynamic joint stability. This system of neurological messages (sometimes referred to as “muscle memory”) is a complex interacting system connecting different aspects of muscle actions (static, dynamic, reactive), muscle contractions, coordination, stabilisation, body posture and balance. The movements of the lower extremity, including the knee joint, are controlled through this system, which needs to provide the correct messaging for purposeful movement. (Oka 2018) 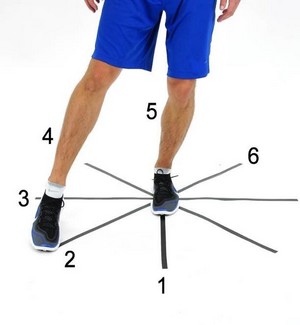 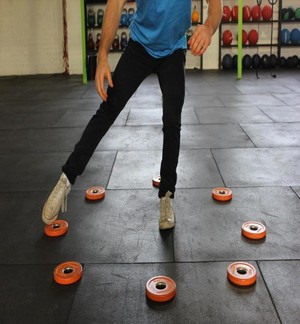 At this stage of his rehab we had some evidence of reduced pelvic, hip and knee control when performing single leg activities. The aim was to return to football and therefore weightbearing single leg work was introduced to improve neuromuscular control. A star slide is a great tool to use and can be performed at home using any guide markers on the floor. By standing on the operated leg, the good leg then toe taps various markers while still maintaining good hip and knee control. This can be quite challenging following orthopaedic surgery, but vitally important in obtaining better control and function. 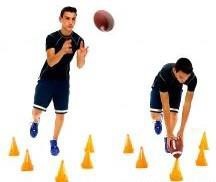 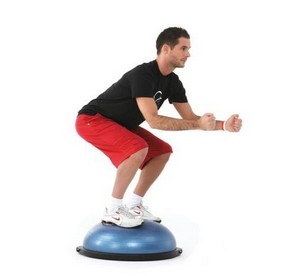 A progression from the single leg star slides was added at a later stage when hip and knee control had improved. By placing markers (cones) on the floor and standing on the operated leg, a more dynamic approach can be introduced. By introducing ball skills (throwing and catching) touching the cones with the ball we now introduce neuromuscular control, hamstring and glute strength work, together with hand eye co- ordination.

Bosu ball training has been around for a while most gyms have these now. There are several ways to use a Bosu, in this case we introduced double leg squats and progressed to throw and catching a ball, passing a ball around the body while maintaining balance. 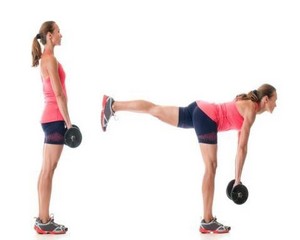 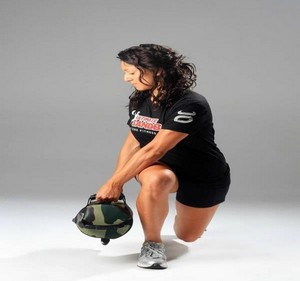 By performing a single leg Romanian deadlift, and forwards lunges with rotation, we can now introduce some loading with fascial sling and core work. Balance, control and strength are needed to perform these 2 exercises, as with all rehab work the focus is on good quality of movement.

As well as training in the gym with all aspects of his strength programme we now needed to add some explosive power, run technique and some rotational movements through the lower limb. We started off with a slow jog on the running machine 3mins, walk 4 mins, jog 3 mins. 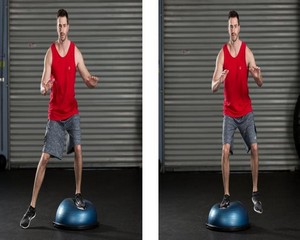 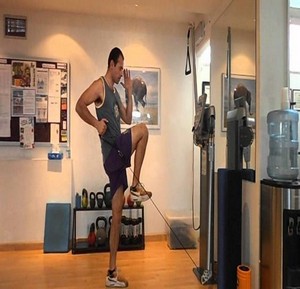 Quick side hops over the top of the Bosu and using the weight pully system in the gym were added. 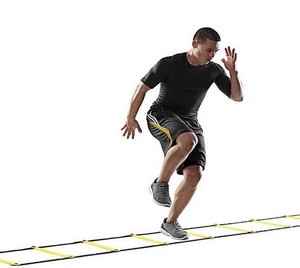 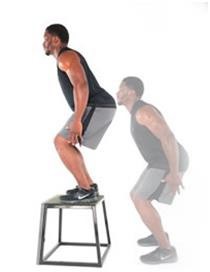 Ladder runs, and box jumps on a low step to start with were added in preparation for football training. We discussed working with his football coach and to start running on different surfaces, footwork and ball skills, practicing kicking at goal and stopping the ball. We also discussed overcoming the psychological preparation and the fear of injury again. Football training went well up to 6 months post op alongside rehab exercises and gym work, however no game was played until 8 months post op.