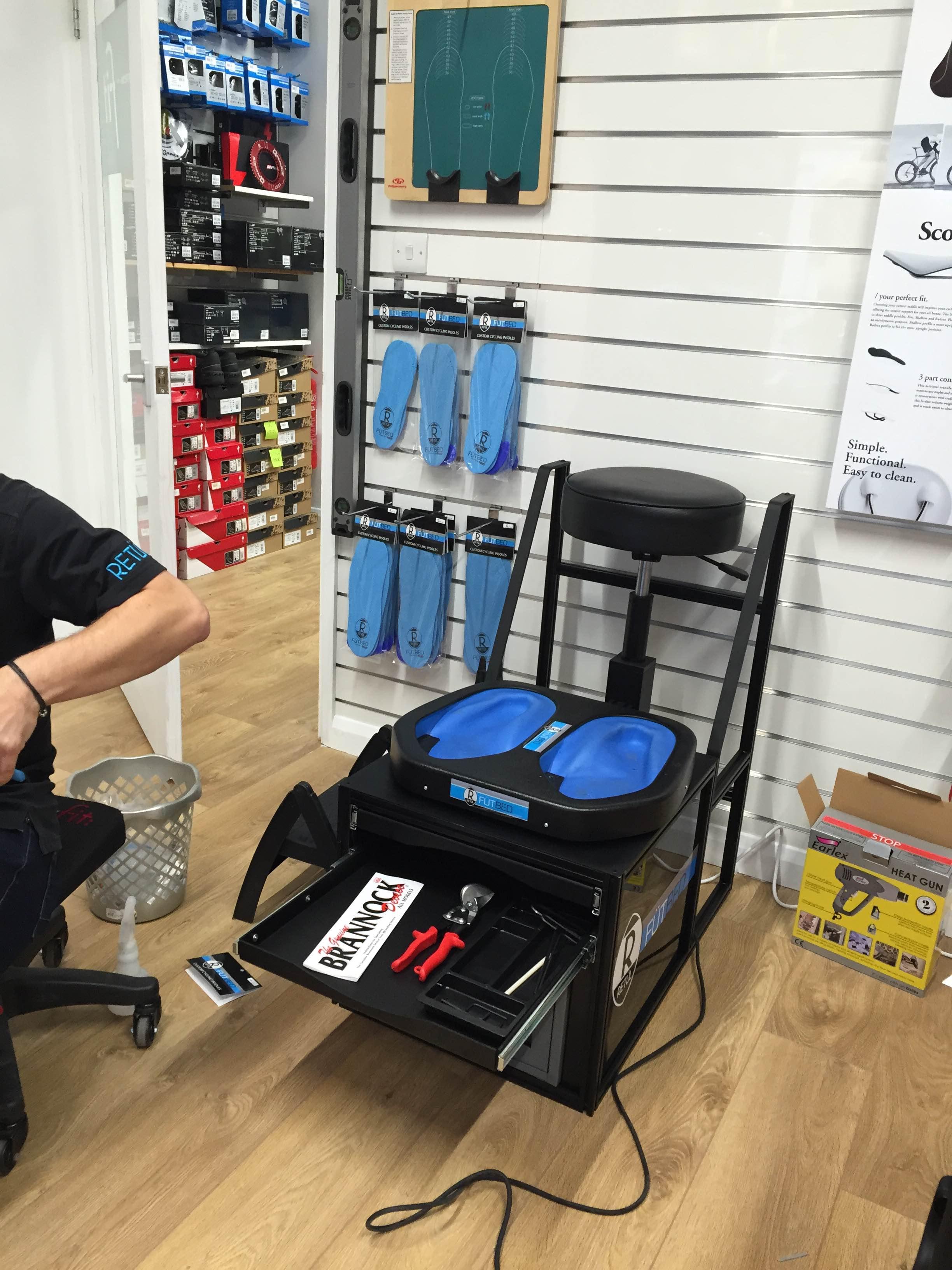 Historically, the foot pedal interface has been a hot topic with regard to professional bike fitting. Almost religiously bike fitters have intervened at that contact point in terms of changing a set up of cleats or adding wedges, leg length shims etc.
I am not suggesting that this is not sometimes appropriate but probably in some cases I would say there's sometimes an over prescription of so called mechanical corrections and there may well be some bigger fish to try as such with regard to someone's gross position on their bike in terms of balance, managing asymmetrical patterns and trying to improve/change for the better the way someone contacts the bike and moves on it.
Get some of these potential big picture problems addressed first and there are times when knee tracking etc may well improve without having to intervene at the foot.
Using Retul technology helps us to quantify a riders movement patterns in 3D space and explain to a rider how an intervention positively and hopefully not negatively impacts their pedalling technique, or ideally cleans up their pedal stroke.
The foot pedal interface is the most fixed point on the bike. The other two at the saddle and bars are effectively 'semi fixed' as there is certainly the ability to move around. We don't expect or see a dried staying at a fixed point on the saddle during a ride although finding a good comfortable 'neutral' point that a rider would naturally sit at is desirable.
Saddle choice and comfort is a whole other topic with how it impacts position. Likewise at the handlebar/ good contact at the front of the bike moving around the bike is natural either going into the drops when appropriate or riding with hands on the handlebar if riding easy is normal.
Conversely, because the foot is so fixed in comparison, problems can develop. Shoe choice is an important first stem and speaking to a knowledgeable retailer/ shop/ bike fitter is a great starting point if you are unsure. It is easy to buy so much on line now, making the right choice can be hard. You probably wouldn't buy ski boots etc without trying first in terms of fit and it's the same kind of thing.
Cleat Set Up
Generally we set up cleats more rearward than traditionally i.e. generally in the past, it was thought to put the pedal spindle under the first mtp joint at the big toe. However in some cases this can be a contributor to forefoot pain, discomfort and the term 'hot foot' is related to this. We now generally set the cleat up more rearward so that the pedal spindle is between the 1st on the big toe side and the 5th mtp on the small toe side. This will generally mean moving the cleat back as far as it will go on most shoes but can vary. It is sometimes hard to get the cleat back far enough on mavic shoes but Bont generally have the holes drilled more rearward. This will usually make the foot feel more stable on the pedal and can relieve some forefoot pressure. Remember that moving your cleats back significantly from a forward position could necessitate adjusting saddle height down a little as the cleats adjustment is like raising your saddle so you will reach further to the bottom of the pedal stroke- assuming your saddle height is correct in the first place!
Cleat Wedges
Another popular mechanical correction is the wedge that is a piece of posted plastic used to generally support what is assessed as a varus forefoot. A large proportion of the population have a varus foot type but I wouldn't say that that population all need varus support under the foot to control their knee tracking. An experienced fitter should be able to identify if pedal stroke mechanics are indeed compromised, causing symptoms or in fact problems are arising primarily from a more proximal source like the hip being weak or saddle is inappropriate or not supportive enough, so it is important to keep an open mind here.

A more preferable intervention in my opinion is providing control and neutral support for the foot inside the shoe in the form of a footbed when it is deemed necessary. This should naturally hold a riders foot without trying to over correct or force the foot somewhere. There are several options open to cyclists now and in a lot of cases an off the shelf product like those made by Specialized can certainly help.
At retül we have developed a custom footbed (or fütbed!) that is moulded to the shape of a riders foot to provide good neutral support in the shoe. This could be described as the gold standard by having a customised offering. They have been developed in partnership with one of the leaders in ski boot foot bed products at Masterfit, but tailored specifically to work well in a cycling shoe in terms of shape and thickness/ top cover material.
We have now made numerous pairs at some of the pro team camps we work with including Europcar, MTN Qhubeka and Orica Greenedge to some very positive feedback.
Retül fütbeds are available at Physiohaus and if made during a fit are priced at £64.99. They can also be made independently and are priced at £84.99.
http://www.physiohaus.co.uk/fithaus-ret%C3%BCl-bike-fit